Do you have any issues? Don't hesitate to tell us about it.
Post Reply Previous topicNext topic
3 posts • Page 1 of 1

I was notified by SOPHOS which the TheoTown.exe was detected as PUA in C:\ProgramFiles(x86)\Steam\steamapps\common\TheoTown\TheoTown.exe.


The TheoTown is a genuine version which i purchased from Steam store. I have to re-install the Theotown directly from Steam Store.
Is there any similar report? Why does a game will be detected as PUA or even malware by antivirus even it is not a pirated/cracked copy?

Although I have whitelisted the directory, this doesn't explains why it is detected on 8 anti-virus engine.
I have uploaded the .exe to virustotal and here's the report.
https://www.virustotal.com/gui/file/85a ... /detection 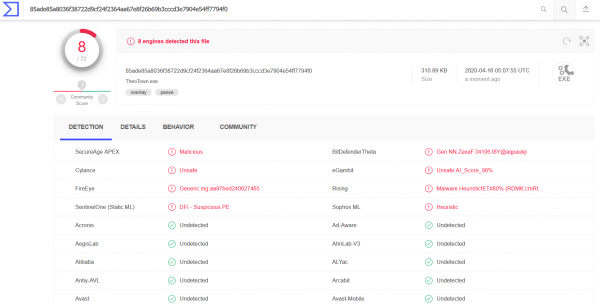 Anyone can advise the above?
Top

Re: TheoTown.exe detected as PUA by SOPHOS Home Premium

TheoTown does not contain malware or any other malicious software. Do you think Steam would allow that?
I'm not lazy, I'm motivated to do nothing!
...blame lobby for that
Top

Re: TheoTown.exe detected as PUA by SOPHOS Home Premium

Yeah, unfortunately some anti virus programs tend to flag anything as potential virus that they are not familiar with (especially since they just look for some pattern most EXE files use and call that "AI"). This is a common issue for indie developers like us since manufacturers of anti virus software tend to make it hard to report false positives without being a customer. I can assure you that the version provided by Steam does not contain any viruses.
Top
Post Reply Previous topicNext topic
3 posts • Page 1 of 1