The massive, 100-mile-wide city of Renanna, the capital of Zayrattan's Kythe Prefecture, has a population of 30.8-million people, making it the 35th largest city on Earth.

On the early morning of Christmas Day, Thursday December 25, 2036, the city was Ground Zero for the worst air disaster, 8th most powerful explosion, and second-largest tsunami on record.

Translucent Airlines Flight 9044, a twin-engine Antonov An-850, was flying in from the neighboring Candle Prefecture, carrying 2,438 people. The plane was being operated by five young, all-female pilots, three female Flight Engineers, and 253 flight attendants, led by 23-year-old Captain Amelia Jakardian.

At 645 in the morning, TLA 9044 was instructed into a holding pattern above Renanna, in order to give the 6 runways at the Renanna International Airport a chance to clear up before the An-850 could land.

At 657am, the pilots reported "smoke in the lavatory" and requested to land at the smaller Jaeyvion International Airport, a dozen miles to the south. However, all four runways at this airport were also full.

As the fire spread through the double-decked Antonov 850, people panicked and retreated to the front of the massive aircraft. The pilots noted a gradual loss of control surfaces and hydraulics and made a last-ditch decision to attempt a touchdown on the 10-lanes-wide Doraleous Freeway on the industrialized Stacker Island.

At 705am, just before the loss of all hydraulics, the pilots managed to line up the aircraft with the northbound five lanes of the Doraleous Freeway.

The jet touched down hard at 707am, making cracks in the concrete on the freeway. As the jet crossed the Jen Brown Floating Bridge, the longest such bridge on Earth, the pilots applied the brakes, but an early-morning morning rain had made the freeway wet, rendering the brakes useless.

The plane's landing gear destroyed several-thousand cars on the Doraleous Freeway, before tearing in half about two miles before the freeway makes a right turn to cross the Malala Yousafzai Bridge. Both pieces continued straight, sliding along the freeway at over 400 miles per hour.

At 708am and 19 seconds, at the Yousafzai Bridge, the wounded Antonov-850 slid off the Doraleous Freeway, crashing through a huge warehouse and a concrete field full of containers, before finally slamming into a storage tower holding 14-million gallons of Canadium right next to the lake.

A massive explosion occurred at 708am and 26 seconds. A bright blue shockwave leveled all buildings within three miles of the blast. All windows in a 70-mile radius were shattered and thrown into people's eyes. The shockwave toppled all four suspension towers on the four-mile-long double-length Yousafzai Bridge, causing parts of the bridge to collapse into Renanna Bay.

Most of the west side of Renanna is dominated by skyscrapers. All the ones within a mile of the lake were obliterated by the shockwave. 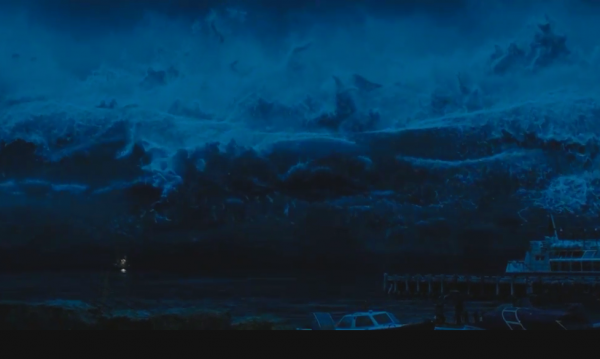 The explosion's proximity to the lake created a 600-foot-tall megatsunami that rushed eastward and southward at 418 miles per hour. The tsunami shredded the Jen Brown Floating Bridge and shoved all the cars off the Yousafzai Bridge. When the tsunami hit the west coast of Renanna, it was just under a quarter-mile tall.

The megatsunami swept over the destroyed skyscrapers on the coast and then slammed into the ones that were still standing one mile inland. The tsunami destroyed them all as it continued eastward through the city. Thousands of people who had watched the plane strike the Canadium holding tower lost their vision when the shockwave threw tiny glass shards in their eyes, so they couldn't see the tsunami. Many of these people also went deaf from the sound of the blast, so they couldn't hear the tsunami either. Those who knew the blast was coming were able to sheild their eyes and ears just in time, but by the time they saw the tsunami, it was too late even for them.

Downtown Renanna was flooded up to a thousand feet deep by water travelling at 206 miles per hour.

As the tsunami pushed farther inland, it began to lose its momentum. Thirty-five miles from the coast, about 20 miles from the center of Rennana, the tsunami had shrank to 100 feet tall but was still sweeping buildings away. The massive tsunami finally lost all its steam 90 when it hit mountains past the east side of the city.

All 2,438 people on board Translucent Airlines Flight 9044 were killed. Another 803-thousand-566 people were killed by the explosion and the megatsunami. A total of 806,004 people lost their lives, and 14-million survivors were displaced.

The explosion left a 4.6-mile-wide crater in the bottom of Lake Titicaca. The northern half of Stacker Island, where the Canadium power plant was built, permanently disappeared.

This remains the single deadliest air disaster in human history, and the second-deadliest tsunami ever recorded.

The government of the nation of Zayrattan imposed martial law on the entirety of Kythe Prefecture for several months while the tsunami receded. Silver Heart emergency responders from 85 countries travelled to Renanna to aid in the recovery and rebuilding efforts. Thanks to Zayrattan's superior technology, the entire affected area was cleaned and completely rebuilt in less than two years.

On August 6, 2038, the International Transportation Safety Board launched a formal investigation into the crash of Translucent Airlines Flight 9044. They found that the lavatory fire was caused by a discarded malfunctioning Zippo lighter. A passenger had been trying to heat up his chronically cold hands with the lighter. The light seemed to run out of butane and the passenger threw it away. The lighter hit the bottom of the lavatory's empty trash can. The impact created a small spark that set the plastic trash can ablaze. The plastic used in the construction of the trash can was highly flammable, which was previously unknown to its designers. After the recovery of Renanna, all 7-thousand Antonov An-850s were temporarily grounded so their lavatory trash cans could by replaced by a newly-released flameproof metal trash can.

The plane's Black Boxes were found in Venacia, Zayrattan's capital, population 40.2-million. The devices and multiple huge fragments of concrete were blasted there by the explosion. On the Cockpit Voice Recorder, the last words on record were those of Captain Amelia Jakardian, just before the plane crashed into the Canadium: "Daddy, I love you."

Three memorials to the air disaster and the resulting tsunami were created by the Zayrattan government, funded by the founders and the CEO of Translucent Airlines. Two of the memorials are both called "The Black Morning" due to the timing of the disaster. The first memorial was built in the rebuilt coast of Renanna, and consists of a 1:14 scaled steel sculpture of an Antonov An-850 flying above a 1:14 replica of the Malala Yousafzai Bridge. A second identical memorial was build next to the 10-lanes-wide Interstate 72 (Mercedes Flowers Memorial Freeway) in a dense rural forest 118 miles west of Venacia. The last memorial is an 100-foot-tall polished granite carving of Captain Amelia Jakardian and her seven flight deck partners. The memorial is called "Undying Devotion" due to the calm demeanor the women possessed in the face of inevitable disaster. The memorial was built in a protected national park near the city of Cierra (23.3-million people) because all eight women were born, raised, and trained in Cierra.

The Jen Brown Floating Bridge and the Malala Yousafzai Bridge were completely rebuilt less than a year after the tsunami destroyed them. Bother bridges still carry tens of of the Doraleous Freeway across different parts of the Rennana Bay.

IMPORTANT NOTE - This story is completely fictional. It is set in the future in several fictional places.

The whole story is based on the demise of Air Canada Flight 797, the 2015 Tianjin explosions, the 1917 Halifax tsunami, and THIS VIDEO:

https://youtu.be/THeDlvLI3nk
Last edited by Tiar/A on Mon Mar 11, 2019 17:27, edited 5 times in total.
I don't ask for much but enough room to spread my wings and the world finna know my name
Top

Do you have read the RP advice?
–Yours sincerely, Soumyabrata
Top

I never thought we have a time travelling machine
Top

Hollup, we can stop this from happening, he just told us the future...

What is the RP advise? And why is this the first time I've ever heard of it?
I don't ask for much but enough room to spread my wings and the world finna know my name
Top

Roleplay Advice, you can get this to Roleplay forum.
Also, do your year system's epoch is AD 20? Just asking.
–Yours sincerely, Soumyabrata
Top

What's a system epoch ...
I don't ask for much but enough room to spread my wings and the world finna know my name
Top

No need to write that long. Just say a Transulcent Airlines plane crashed.

I haven't had a very good day. Don't tell me how to describe an event in my country's history.
I don't ask for much but enough room to spread my wings and the world finna know my name
Top

Great history... the disasters of an country... more pics is recomend.