Welcome, this is Capitola Public Broadcasting Center, or CPBC for short, a nationwide broadcasting network headquartered in the Wolcott Building in Sethville, CA. Here, we will post news and other stuff happening in Sethland.

Oof, I forgot I ever made this topic lol

Breaking News...
The Davenport Trojans have defeated the Nova Scotia Duits 37-45 in the NFC Championship, and have advanced to their first ever Super Bowl in their 16 year History...

Operation Caracas has been given a lawsuit after it was revealed to be an illegal operation and that the Sethlandian Navy didn't authorize the operation. Lieutenant Javier Caracas, 41, was the head of the operation, and there will be a trial in Sethville next week. If found Not Innocent or Guilty, he is to give up his passport and resign from the Sethlandian Navy and Armed Forces, and faces up to 15 years in prison

There was a minor accident on I-75 Southbound heading towards Riverrun, and 1 mainland is blocked, and on Highway 10 heading into Downtown, the Interchange on Capitola 170 is closed after a truck with gasoline crashed on the ramp. There is Construction on I-575 northbound near Capital Heights, and 3 of the 5 main lanes are closed, with Cars going from 35-50 mph on the Weststate Freeway

The Cambridge Kings and the Davenport Trojans will be facing eachother in Super Bowl 53, and will be the first time the state of Oahu hosts the Super Bowl. It was also announced that Sethville Knights' Alta Field will be hosting Super Bowl 54, and will also be hosting 5 games of UniCup 2019. Also, NSL Champions El Mundo Stars beat the Nickers FC 5-4 yesterday, after Holbert Crós scored a miracle goal at the end of the game. The Sethville Spooners are on a 17 game win streak, and are at the top of the Sethlandian Hockey League, with a record of 41-7-1.

Sethland joins TSC:
Yesterday, Sethland joined Theovision's TSC, a singing competition, and the Team will he singing the legendary rock song "Bohemian Rhapsody". The will be working hard and hopefully, win the competition.

Traffic (Sethville) :
Rush Hour left quite alotta traffic, but it's good now. On Route 10, coming towards Uptown, there is a slow pace on the east bound lane, exiting Starr Ave, and the speed is about 45mph. On I-575, there is still some construction on the north bound lane near Capital Heights, and 3 of the 5 main lanes are closed.

Tomorrow, the NLF will host it's annual All-Star Bowl, where the stars of each Conference play eachother. It will be the SFC All-Stars against the NFC All-Stars. The Sethland National Soccer Team will be playing in Group C of the UniCup 2019, and will be in the group with Sedile, Svostine, and Domkisas.

Good Afternoon Sethland, earlier today, we got some shocking and sad news. It has been announced that Former President Jacob Hartfeld has sadly passed away at age 88. Hartfeld was a great president, who served in office from 1990-1994, and accomplished many achievements during his presidency...
RIP... Jacob Martin Hartfeld, 1931-2019

Traffic (Sethville) :
It is Currently rush hour, so there is quite alotta traffic in the Downtown and Uptown areas. You can expect being stuck for 10-20 minutes in a traffic jam on Route 10 in uptown heading towards downtown, but can take the HOV lane for avoiding traffic. Also, today, I-75 North bound lane coming from Norfolk, BK will be closed today, due to Late President Hartfeld coming to the Capital for final respects...

Sports :
The Super Bowl will be held this Sunday at Kanaloa Stadium in Tahiti, OU, at 5:30 PM ct, and it will be the Cambridge Kings against the Davenport Trojans. Also, they have updated the uniforms, and have added a patch in honor of Late President Hartfeld. Also, in the beginning of Super Bowl 53, the will be a Moment of Silence in honor of Late President Hartfeld. Also, it was revealed that Aizat Othman will be one of the performers in the Super Bowl 53 Halftime Show, alongside Pop Band Red Velvet and Rappers Lil Smack and Nesh Grizzly. 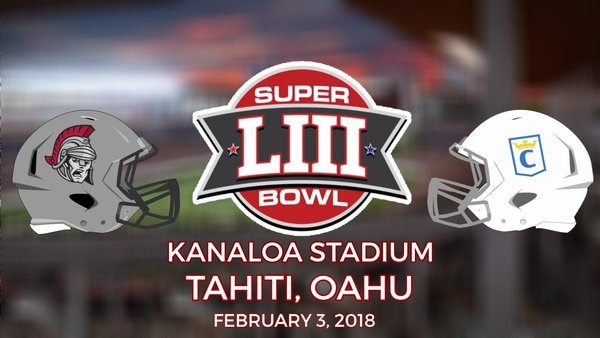 Breaking News...
After spending 46 seasons in the 6th largest city, the Vallisburg Hogs owner R.J Fuller has officially announced that the team is relocating to the city of Quinta, GL, after the Stadium lease agreements expired. They will be temporarily playing in the C. Topher Stadium for the 2019 Season while a new stadium being built is scheduled to open before the 2020 season. The residents of Vallisburg would like to thank the Hogs for bringing many years of joy and football to the city. Thank You...