By request of @Josh I quickly made some Soldiers as an Addon to my Military Vehicles Set which you can find here:
http://www.theotown.com/forum/viewtopic.php?f=63&t=3988
It is probably nothing spectacular really, people in Theotown are just three pixels after all, but maybe it would be useful to some folks.
So go ahead and create same epic battles

The set includes two entries:
Various groups of soldiers in sand uniform as well as in woodland uniform, all without a ground texture to place them anywhere in your city.
The "sand camo" is my own while the "woodland camo" is the same as in the original Military Addon by Lobby & Theo.

As with the Military Vehicles, I decided to make the Military HQ from the IAP as a requirement.
Therefore, again, I explicitly prohibit any changes to the json and the pngs. Do not try to circumvent this requirement!
So, you cannot use this unless you have purchased the Military Addon before. 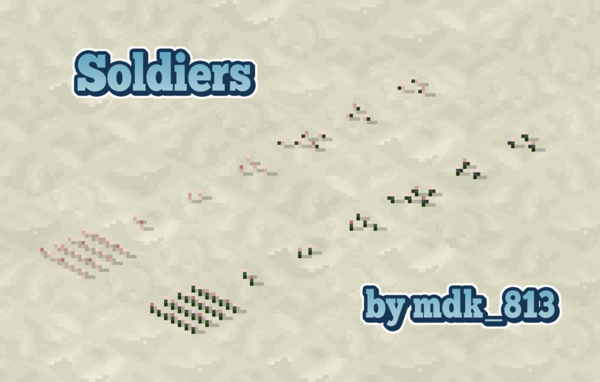 Maybe some Military Buildings next? I really would like some
Top

This and the soldier pack are my Favourite plug-ins
Top