The Lua scripting language allows you to give your plugin more advanced features.

if you tried to use Lua for your plugins in the past you may have noticed that restarting the game every time you made a change to the script can be really time consuming. Wouldn't it be nice - and way more productive - to be able to edit a script with the game applying the changed automatically in real time? That's exactly what can be done by a newly introduced helper script called #LuaWrapper.

Right now your json to include a script may look like that:

For real time scripting use this form:

This looks complicated, so how does it work? The #LuaWrapper script (that is predefined in the game) handles loading and reloading the given script file "myscript.lua" once it detects changes. The "dev":true is there as an easy switch to disable real time scripting, e.g. for release of the plugin.

Caveats
Of course there are some caveats because of which real time scripting is not used by default for scripts. Especially, it should not be used in published plugins:
See here for a video of how real time editing looks like:
http://www.youtube.com/watch?v=EE9qoKTCbZ0

The example can be downloaded from here:

Not understanding rnything but ill say... its so great
I threw my dignity to trash and downloaded Free Fire... But someway i liked it ":'D

Added a video for clarity.
Top

Does the script have to be named "myscript.lua"?
All of my plug-ins, maps and more:
https://sites.google.com/view/retrocity ... authuser=0

No, it just have to match with what you specified as script for the LuaWrapper

I asked because whenever I change the name of the script, I get this error: 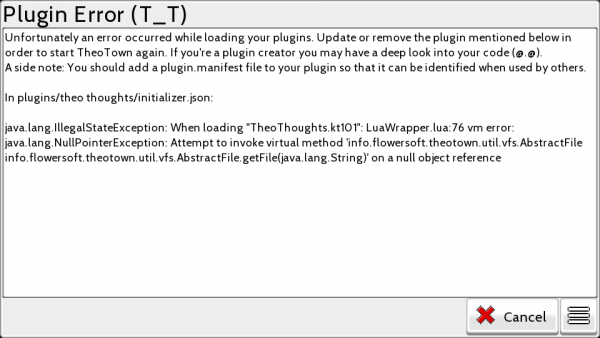 All of my plug-ins, maps and more:
https://sites.google.com/view/retrocity ... authuser=0

Have you tried a lowercase name? In this specific instance it might make a difference.
Top

That's odd. I guess I'll try it though.
All of my plug-ins, maps and more:
https://sites.google.com/view/retrocity ... authuser=0

Thanks for the help, that fixed the issue.
All of my plug-ins, maps and more:
https://sites.google.com/view/retrocity ... authuser=0