Hi folks,
today I have some New Soundwalls for you which are not puzzle pieces but a linetool that uses "frame alignment" and works just as the road tools do.

It is a complete rework of my first plugin for Theotown, which back then I could not have done without the help of former member who kindly provided a json file.
You can find the old Soundwalls here: http://www.theotown.com/forum/viewtopic.php?f=63&t=3394
Here you can follow the initial development of the old plugin: http://www.theotown.com/forum/viewtopic.php?f=34&t=3384

There are a number of reasons for this rework:
- I wanted to turn the Soundwalls into a linetool to make their placement much easier.
- The Soundwalls have reworked textures so that they look less plain now.
- The shadows have been reworked so that the "dent" from the shadows of the original walls is eliminated.
- The new Soundwalls now have the ability to form X- and T-intersections.
- I plan on including the Walls in a future plugin, but unfortunaley former member has been unreachable for quite some time now, so it became necessary to create a whole new plugin.

As I've said, the New Soundwalls are a linetool which you can use to draw walls the same way as you would draw a road.
It still has a noise reductive function but it is now part of the deco menu (whereas the old walls were in the park menu).

P.S. former member, if you read this, we miss you here! 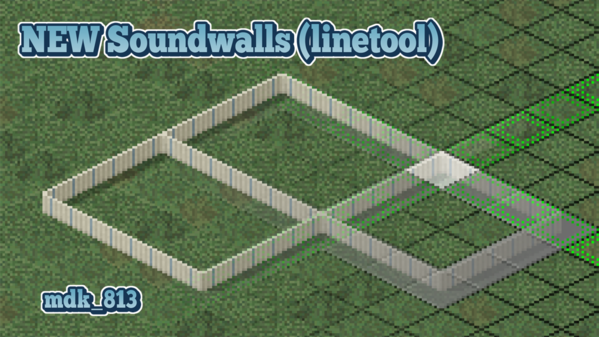